With this music the roller-coaster dips into the carnival below, beyond the disfigured faces behind the masquerade. “I am everyone and no one. Everywhere. Nowhere. Call me… Darkman.” So ends Sam Raimi’s [Born 1959] superhero film. Unable to secure the rights to Batman or The Shadow Raimi wrote his own story, which was then scripted by Sam Raimi, his brother Ivan Raimi and Chuck Pfarrer. ‘Darkman would be Raimi’s first Hollywood film and he originally had Bruce Campbell lined up for the leading role, however the Studio balked at the idea of an unknown quantity playing the lead so Liam Neeson [Born 1952] was eventually chosen for the role of Peyton Westlake aka Darkman. The plot revolves around four main characters 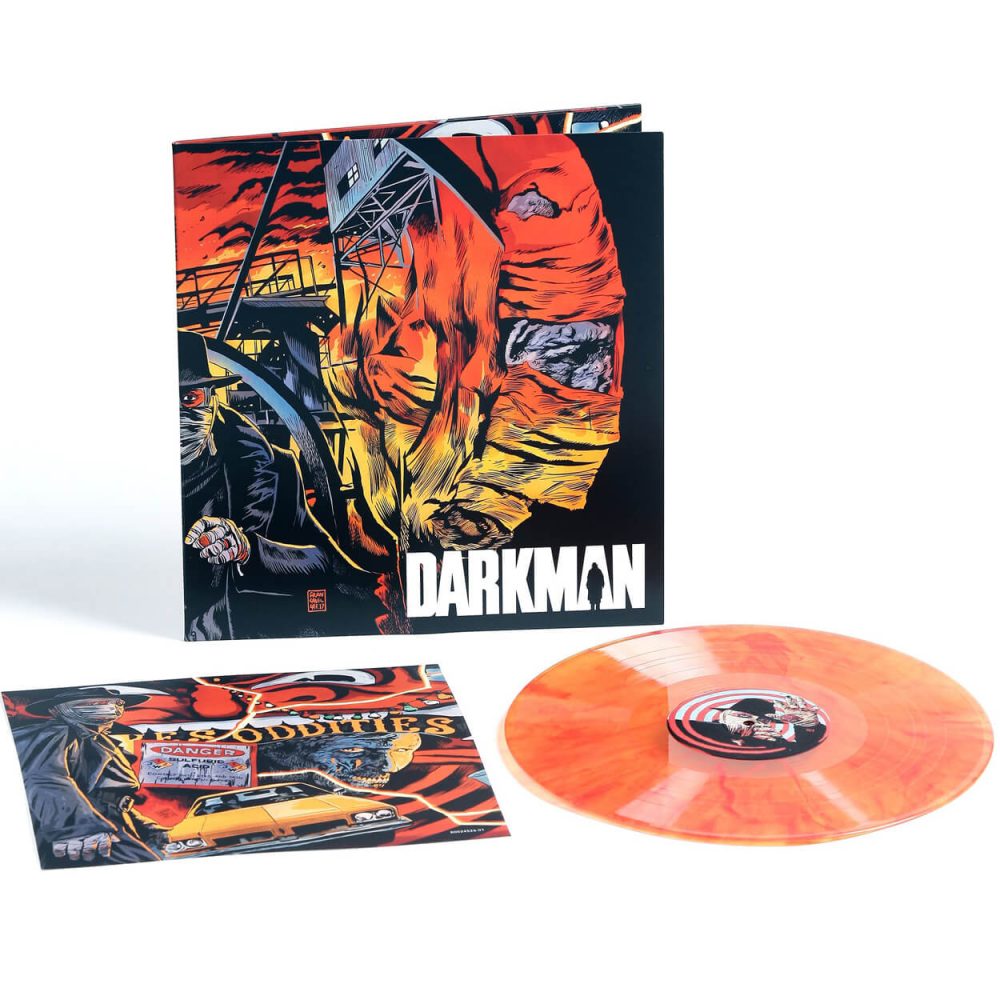 ; Peyton Westlake a scientist attempting to stabilise a synthetic skin for use in plastic surgery. Julie Hastings (Frances McDormand), Westlakes love interest who has obtained the Bellasarious Memorandum which Louis Strack Jr. (Colin Friels) a corrupt developer and Robert G. Durante (Larry Drake) a mobster want, and shan’t stop at murder to obtain. After Durante searches Westlake’s lab, torching him in the process, leaving him disfigured and killing his assistant, they blow up the laboratory with Julie watching on. Westlake is blown through the roof and lands in the river. After surgery that cuts his spinothalamic tract Westlake no longer feels pain, although he loses his tactile sensation. The result is enhanced strength due to adrenaline overload, from then on injuries do not incapacitate him, although the experience has left him somewhat unhinged. Rebuilding his lab in a condemned building, Peyton Westlake now Darkman plans his revenge using his synthetic skin as various masks to sow discord amongst Durante’s men. The film was received well by critics at the time of its release in 1990 and pulled in audiences at the box office, making a gross profit.

Those familiar with Danny Elfman [Born 1953] will probably know of his collaborations with Tim Burton, ‘Pee-Wee’s Big Adventure’, ‘Beetlejuice’, ‘Batman’ and ‘Batman Returns’, ‘Edward Scissorhands’ and ‘Mars Attacks’. He has also notably scored the terrifying ‘Nightbreed’ soundtrack for the Clive Barker directed film (which has also had a fantastic release through Waxwork). The Warren Beatty ‘Dick Tracey’ was also scored by Elfman. At age 11 he saw ‘The Day the Earth Stood Still’ with music scored by Bernard Herrmann and from that moment on he became a lifelong fan of film music. Some of Elfman’s influences can be heard in his music most notably Maurice Ravel, Erik Satie, Bela Bartok, Carl Orff, and Harry Partch. So, you pays your money and you takes your chances, buckle up and let the carnival begin. 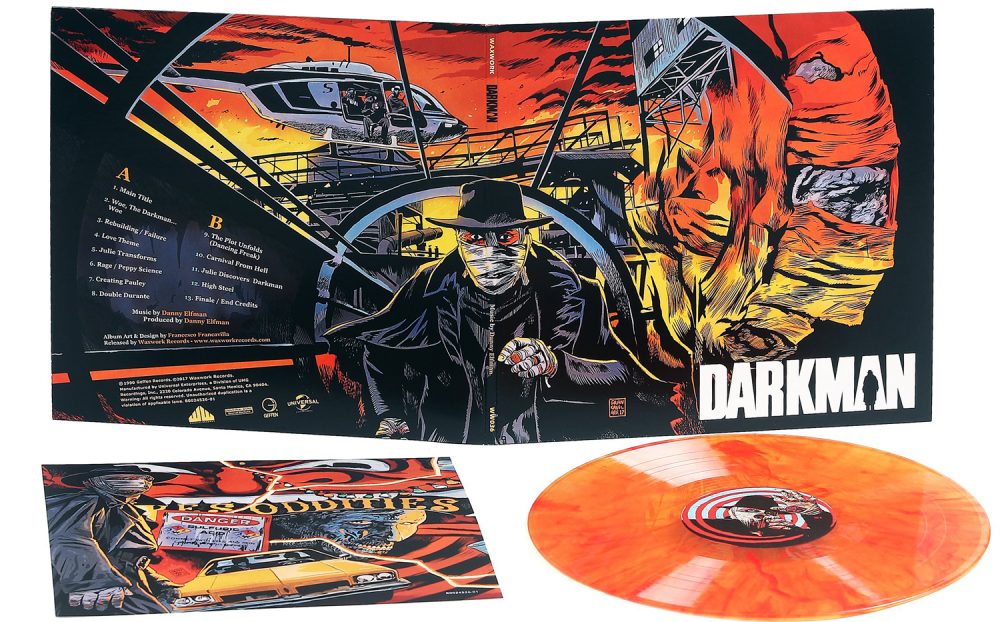 Side A – Begins with ‘Main Title’, darkly ominous kettle drum and horn section augmented by flute flourishes, segues into ‘Woe, The Darkmanâ€¦ Woe’, dark and sweet, makes me think of a whirley-gig smashing through a ceiling and landing in calm waters, softening horns and strings break and the piece ends in harp. ‘Rebuilding/Failure’, strings dominate and set a tender mood. ‘Julie Transforms’ is woodwind and ends with bells. ‘Rage/Peppy Science’, spectral voices and and a furious playing of instruments. ‘Creating Pauley’ has organ and brass and eerily ethereal voices (chorus), plucked harp accompanied by string section. ‘Double Durante’, panic, speeding up the tempo and ending in a high note for the lead trumpet which closes Side A. 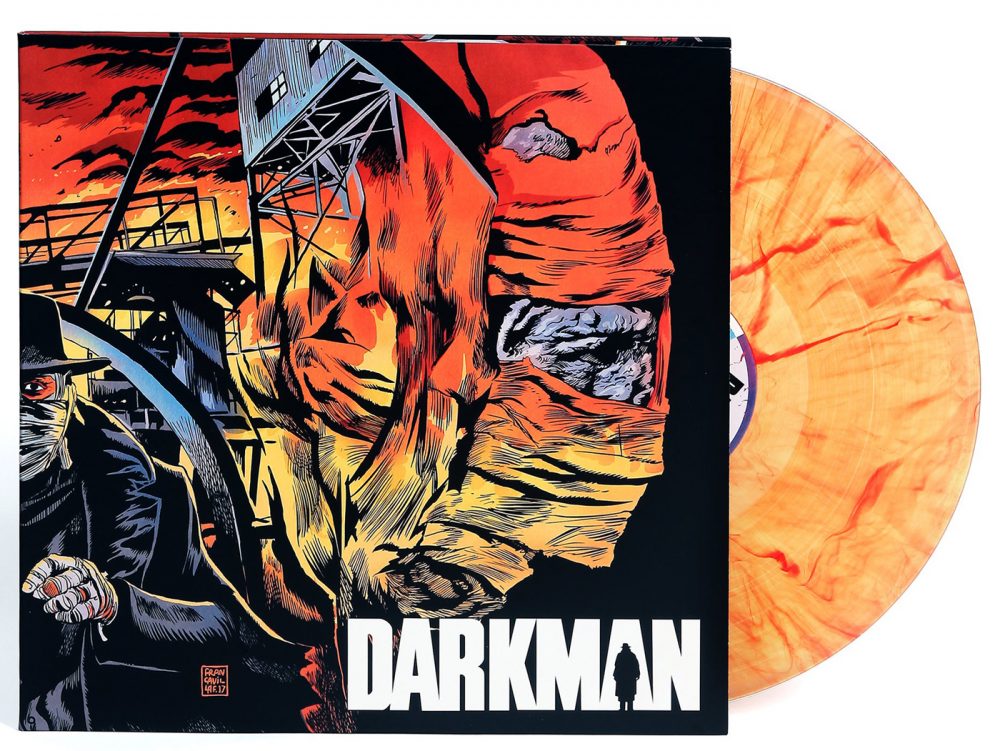 Side B – ‘The Plot Unfolds (Dancing Freak), ‘Jaws’ like strings lead into a discordant refrain and then a lament, kettle drum builds with horn section trilling and then calm with bell ringing; contemplative with warm strings heating up for intro into ‘Carnival From Hell’, Merry-go-round music for psychopaths, with horn flourishes, xylophone, ending with horns. ‘Julie Discovers Darkman’ sets a pensive mood with lead violin to fore. ‘High Steel’, Cymbals with crashing orchestration, up the tempo (“fight-fight”), lull and then ensuing fast tempo trumpet call and response, gong and bell ringing. ‘Finale/End Credits’, mournful string section and ‘Main Title’ reprise end Side B and the LP. This Danny Elfman album will not be becoming a plastic dish anytime soon, so you should look elsewhere for a petri-dish to grow your skin samples in. The carnival never stops.