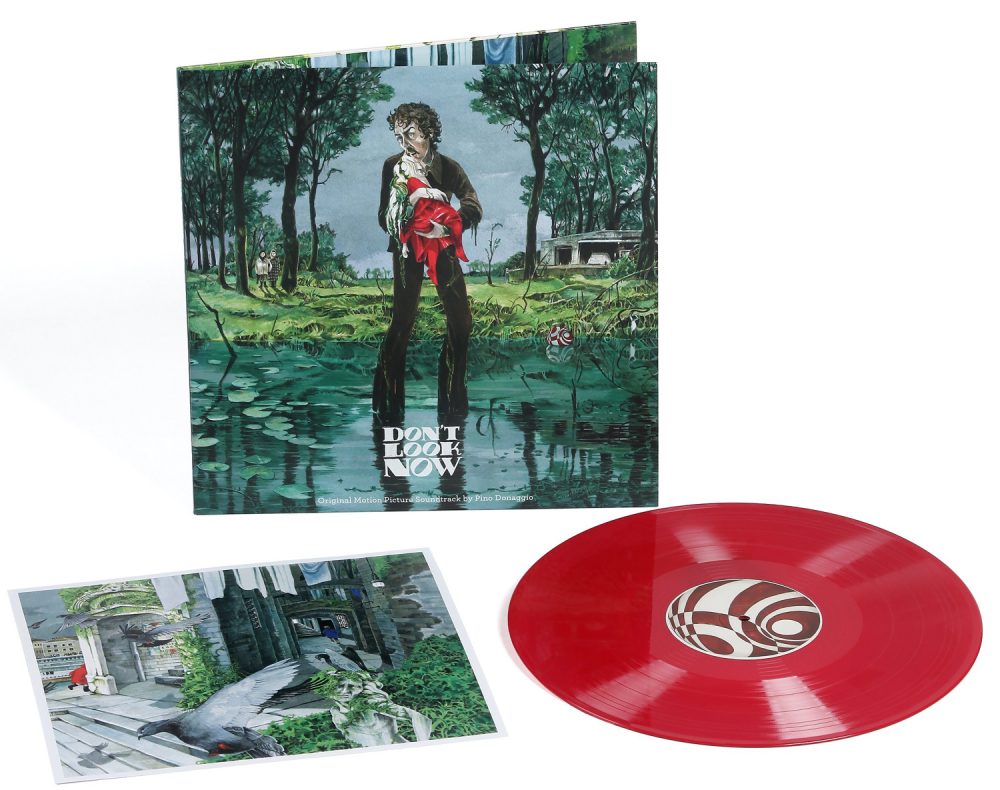 Now you’ll see red; RED RUM. ‘Don’t Look Now’ a film that is now considered a key work in the horror genre of cinema and has caused some critics to reappraise it some thirty years after it’s original release. A guarded Pauline Kael writing in 1973 for The New Yorker wrote “the fanciest, most carefully assembled enigma yet put on screen.” Jay Cocks for Time wrote more enthusiastically “Don’t Look Now is a rich, complex and subtle experience that demands more than one viewing.” The film’s director Nicholas Roeg [Born 1928] who had previously co-directed ‘Performance’ and directed ‘Walkabout’ and would direct the inimitable ‘The Man Who Fell To Earth’. Roeg is a master of producing a timeframe that encompasses past, present and future. The theme of the doppelganger pervades ‘Don’t Look Now’ and can be seen in many forms such as Laura (Julie Christie) when accompanied by clairvoyants Heather (Hilary Mason) and Wendy (Clelia Matania); seen on the canal by John (Donald Sutherland) when she is supposed to be back in England attending their son. In the original Du Maurier short story Christine, their daughter dies from meningitis and the story opens in Venice. However in Roeg’s film the couple’s daughter drowns while attempting to retrieve her toy ball. Red, a recurring theme of Roeg’s films makes an early appearance in the form of the young girl’s coat, a major plot device that is wound up to creepy effect at the conclusion of the film. The colour red was also used in his camerawork on the films ‘Farenheight 451’ and ‘Far From the Madding Crowd’. The prevailing melancholy of the film weighs heavy with the memory of Christine; who is constantly recalled in the films imagery. There is no need for me to blow a trumpet for Nicolas Roeg, he is one of the great directors, asked why his films worked so brilliantly he modestly said he didn’t know, luck. He had previously worked as cameraman for David Lean [1908-1991] on ‘Lawrence of Arabia’ and ‘Doctor Zhivago’, fired half way through production all the great shots were taken by Roeg; neither film would have been the films they are without him. Raise a glass of RED to a Master Filmmaker.

Pino Donaggio’s [Born 1941] first work for film. As the story goes, one of the film’s Italian producers Ugo Mariotti spotted Donaggio on a Vaporetto on the Grand Canal in Venice and took it for a “sign”, contacted him, reluctant at first because he had no experience in the field, he decided to accept. The London based producers didn’t want an inexperienced composer but they were overruled by the films financiers. Not a particularly good pianist by his own admission he plays ‘Laura’s Theme’ on the soundtrack with childlike naivety, Donaggio also plays flute on the love scene, and is an accomplished flautist, the results are stunning. Before ‘Don’t Look Now’ he was known in Italy as a singer/songwriter; since 1959 when he had discovered rock ‘n’ roll and debuting with Paul Anka. In 1966 he had a hit with “Io che non vivo” in English “You Don’t Have to say You Love Me” covered by Dusty Springfield and Elvis Presley. The score won an award and was hailed by critics, which was the encouragement Donaggio needed to change career. Since ‘Don’t Look Now’ he has scored Joe Dante’s “The Howling”, David Scmoeller’s cult slasher “Tourist Trap”, as well as ‘Two Evil Eyes’, ‘Trauma’ and ‘Do You Like Hitchcock?’ for Dario Argento and also Brian De Palma’s ‘Carrie’ amongst his many soundtrack productions. 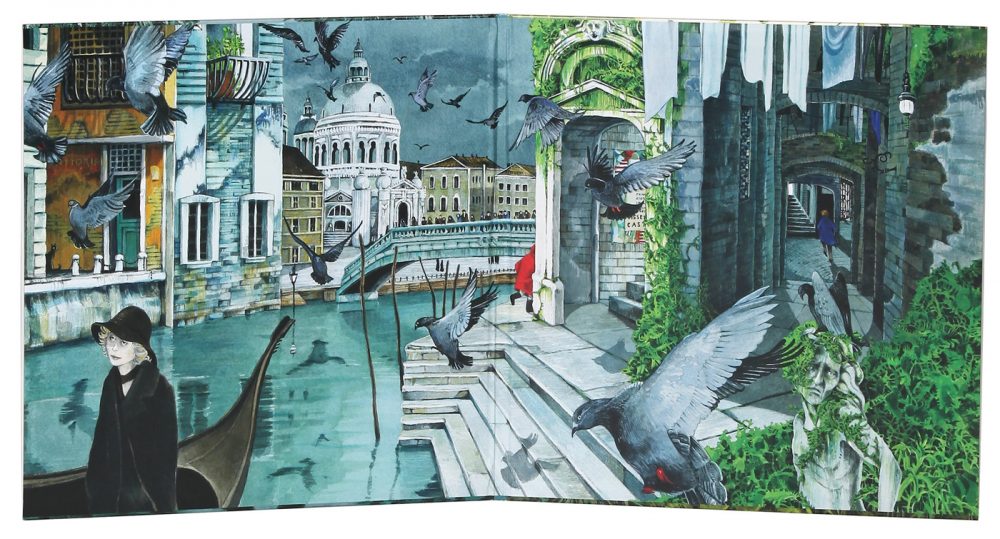 This Waxwork Release of Don’t Look Now arrived in a robust deluxe heavyweight sleeve. Jessica Seamans has done an incredible job with the cover art, an unsettling illustration of the iconic opening scene which captures the mournful tone of both the film and score. The vinyl itself is a rather splendid opaque translucent red, “Raincoat Red” no less.

Side A – ‘John’s Theme (Children Play)’, a naively played melancholic piano piece. ‘Christine is dead’, orchestral arrangement with synth line, heavy cello and harp flourishes. ‘Candles for Christine’, cello and violin, with a violent, organ fugue; the mood again is black sadness. ‘John’s Theme (Love Theme) sounds like a lament for piano with accompanying flute and classical guitar, rather beautiful, halfway through it speeds up changing the mood to found joy, before returning us to the slow tempo of pensive sadness. ‘Strange Happenings’, sustained chord that builds and breaks like a wave on a sea wall, eerie, hypnotic strings and rasping snakelike flute flurries. ‘John’s Theme (Laura Leaves Venice)’, a warm farewell to Side A. 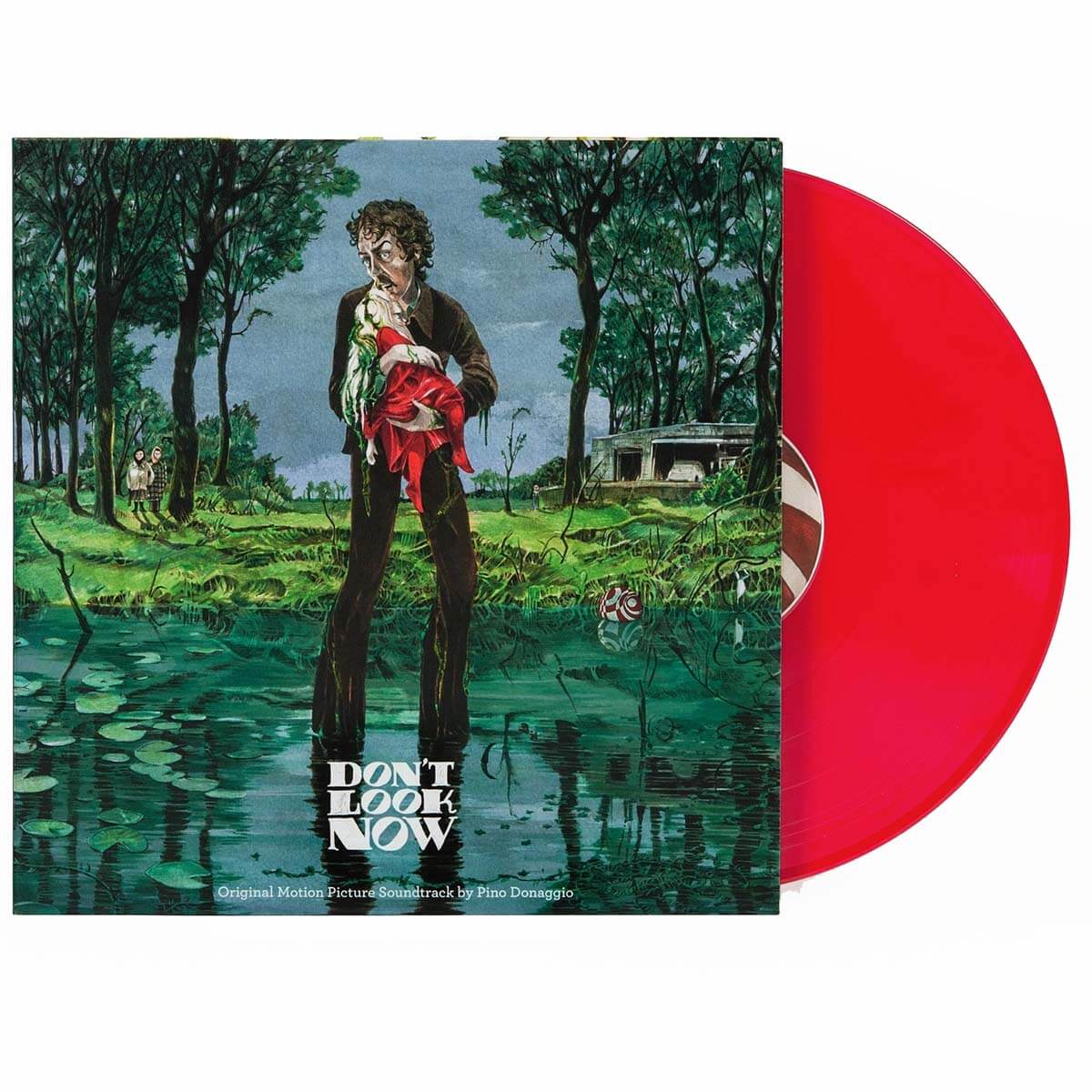 Side B – A little longer than the first side it opens with ‘John’s Vision (Laura’s Theme)’, which begins with Donaggio’s consummate flute playing before strings come into mix, somewhat reminiscent of Vivaldi. ‘Searching for Laura (Laura’s Theme)’, Flute, with classical guitar followed by a string section in full flight. ‘Through the Streets of Venice’ comes strings and a return of the menacing viper like sound from Donaggio’s flute, piano and synth lines, flute and piano notes punctuate the rising tension and creeping unease, piano echo and the strings lead to fade out. ‘Laura Comes Back’, is a reprise of ‘Laura’s Theme’ played on piano; then vibraphone and strings with intermittent quiet, then eerie almost discordant violins, plucked strings and harp glissando. ‘Dead End, the viper shrill reprises, and orchestral confusion ensues. ‘Laura’s Theme (The Last Farewell)’ Donaggio plays solo piano to start with, which segues into orchestra and organ, piano and strings. Melancholic horror music for the psychologically damaged… thus ends Side B and the LP.

Also available whilst stock lasts is the 1981 press from That’s Entertainment Records.