This Reviewer is a very recent newcomer to Jonathan Dennison’s Cadabra Records, so it was with some hesitation that I prepared to listen to this record; however I may now advise you to turn the lights down low, as the last glowing embers of the sun set across the crumbling skylines of once great metropolises, and beneath the wormwood dales of ancient eldritch countryside. Place the stylus on your copy of ‘The Yellow Sign’ long player by Robert W. Chambers and prepare for the creeping horror contained therein. Narrated by Anthony D. P. Mann with incidental music by progressive rock and horror aficionado, Goblin keyboardist, Maurizio Guarini.

‘The Yellow Sign’ – Written in 1895 by Robert William Chambers [1865-1933] who had been appropriately an artist in early life. He entered the Art Students League at around the age of 20 and travelled to Paris, France to enrol at the Ecole des Beaux Arts between 1886 and 1893. On returning to the United States Life, Truth and Vogue published his illustrations, however for unknown reasons he gave up fine art and turned his attention to writing. With two novels under his belt Chambers changed direction and wrote ‘The King in Yellow’ giving the public what it wanted in the form of ‘Weird Fiction’. Chambers, according to S. T. Joshi’s [Born 1958] notes (contained in a twelve page colour pamphlet book that comes with the album), would never again achieve the hellish intensity of that first foray into the macabre (Although he came close with ‘The Makers of the Moon’ [1896] and ‘The Mystery of Choice’ [1897]). By 1927 August Derlith [1909-1971] writing to H. P. Lovecraft [1890-1937] could complain that ‘The King in Yellow’ was becoming difficult to obtain. Influenced by Ambrose Bierce’s [1842-1914] collection ‘ Tales of Soldiers and Civilians’ [1891] English edition 1892 titled ‘In the Midst of Life’, probably read shortly after his return to America from France. Chambers shares place names with Bierce and also the later Lovecraft (names such as ‘Haster’, ‘Lake of Hali’, Demhe, Yhtill and Alar, in fact Lovecraft joked that he must have read the dreaded ‘Necronomicon’). Lovecraft and Clark Ashton Smith [1893-1961] admitted admiration for Chambers, however their brand of ‘cosmic’ horror was not influenced by Chambers and the names were simply recycled by the likes of Lovecraft and had been used before by Bierce. 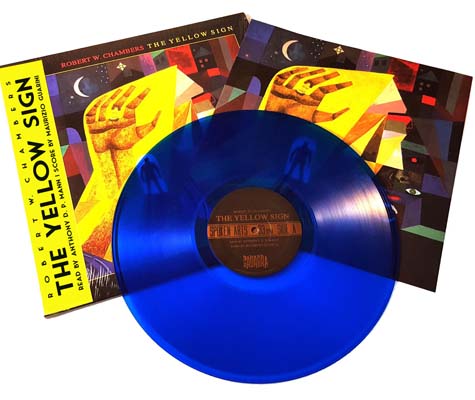 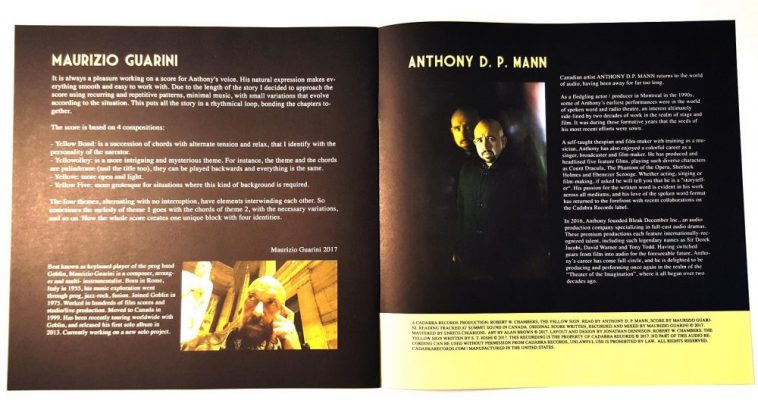 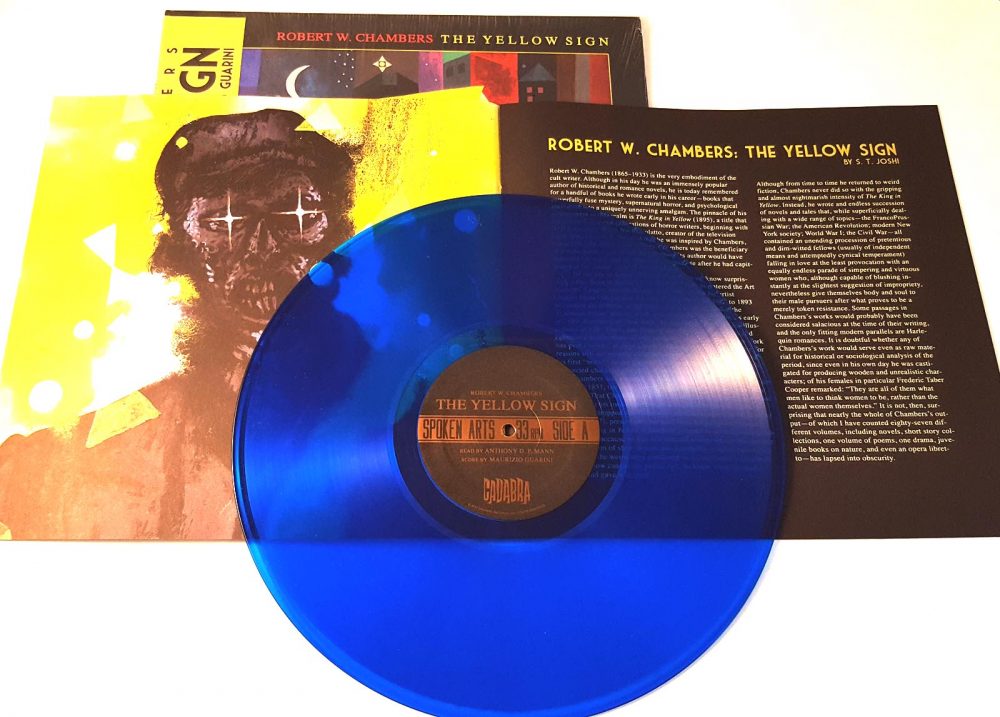 The music is scored by Maurizio Guarini [Born 1955] who himself is no newcomer to the scoring of horror soundtracks, rather a seasoned alumnus. His skill truly shines on this release. Using electronic keyboards for great emotional enhancement. He never floods the narration as the music ebbs and flows, taking the listener on a journey to the conclusion, still shocking more than a hundred years after it was written. The information in the booklet tells us that Guarini uses repetitive patterns and minimal variations for certain situations. The story is thereby placed in a rhythmical loop which ties chapters together. There are four themes – ‘The Yellow Bond’, ‘Yellowolley’, ‘Yellove’, and ‘Yellow Five’, these compositional themes are interchangeable: i.e. melody of theme 1 may go with chords of theme 2 and so on. The reader Anthony D. P. Mann is a well established narrator of weird fiction and helms Bleak December almost a companion label to Cadabra Records. His voice falls on the correct side of Vincent Price’s [1911-1993]; that is, not pastiche or corny, but capable of pulling the listener into the web of horror. He has apparently worked on other Cadabra Records releases and his metier as a thespian has come full circle back to the ‘Theatre of the Imagination’ where it all started for him in the 1990’s.

The artwork, although not in the style of the mid 1890’s, is rather in the style of the second decade of the twentieth century. However the expressionist art of the album sleeve and booklet are suitably jarring; of a kind of painting style somewhere between Otto Dix [1891-1969] and Paul Klee [1879-1940]. Alan Brown is to be congratulated, for bringing the listener into the visual world of late Wilhelmine and early Weimar cinema; of films such as the late vertigo inducing expressionist masterpiece ‘The cabinet of Dr. Caligari’, directed by Robert Wiene.

This variant of the release is the Psilowave exclusive UK and European pressing, on transparent blue vinyl (my copy was perfectly flat and crackle free) and is limited to 100 copies. The album comes with a twelve page booklet as previously mentioned, and the production values are high indeed. Cadabra Records certainly have a new convert here.

Grisly In Klondike "Mission Statement"2. Dualism, Holism And The Psychology Of Love In Time And Space