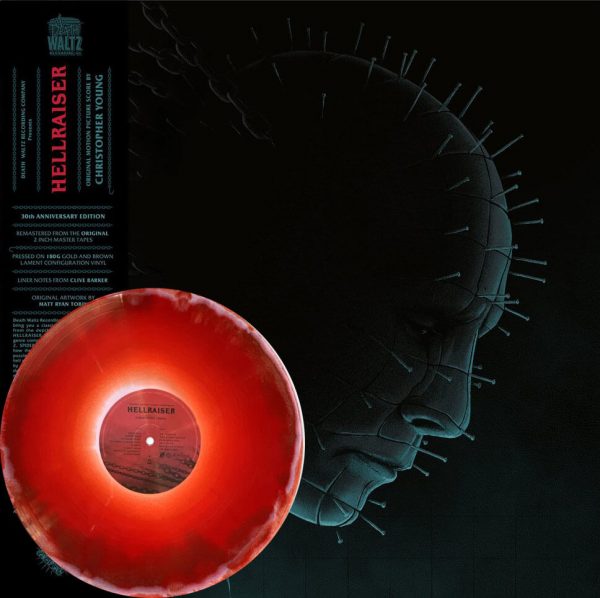 Death Waltz Recording Company is proud to bring you a classic horror soundtrack fresh from the depths of hell – Clive Barker’s HELLRAISER with music by celebrated genre composer Christopher Young (THE FLY 2, SPIDER-MAN 3, DEF-CON 4). You know how the story goes: pick up a strange puzzle box, try to solve it, just to end up in hell, subjected to infinite torture by a guy with pins in his head. Bad day, bad day. But HELLRAISER is a gothic horror masterpiece celebrating the transcendence of pain into pleasure and the question of what awaits us after death. One thing’s for sure: there will be blood. And rats nailed to the wall.

Young’s main theme mirrors the Lament Configuration, the Rubik’s cube of the damned that is the centre of all this bloody mayhem, underlining the seductive nature with violins before opening up with the full orchestra to foretell the true nightmare contained within. The score features industrial elements reminiscent of the band Coil (who were originally due to score the film) intertwined with the sensual gothic overtones illustrating the next level of gratification the box offers, and it explodes in the final act as Pinhead and Co. come for their student of deviancy. Composer Christopher Young wen’t back to the original reels for this anniversary remaster celebrating 30 years of the coenobites and the twisted mind of Clive barker. Charlie Brigden (THE SOUND OF FEAR Podcast)