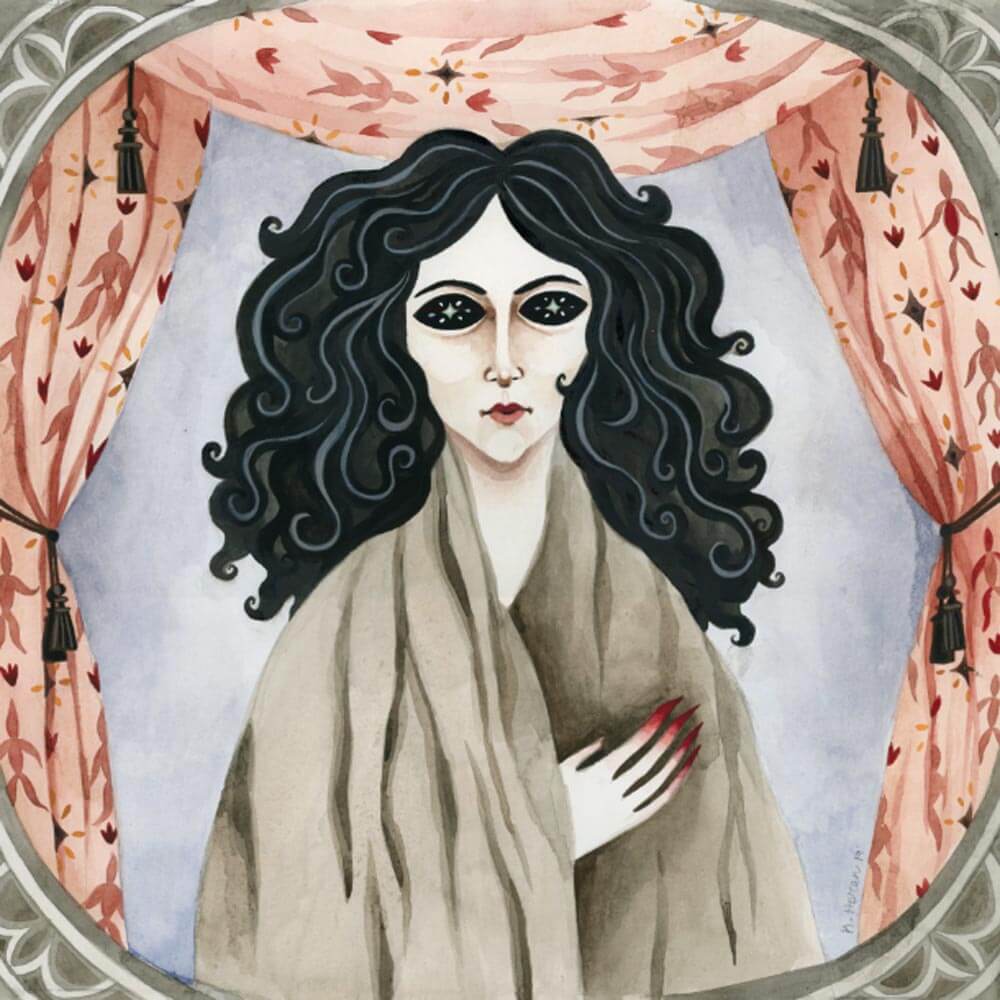 An excerpt from Fabio Capuzzo’s liner notes:
Ligeia was first published in the Baltimore American Museum magazine, on September 18, 1838. The story was revised a few times throughout its publication history. It is included in Tales of the Grotesque and Arabesque (1840), in Phantasy Pieces (1842), and Tales by Edgar Allan Poe (1845). The poem The Conqueror Worm, published by Poe in January 1843, was first incorporated into the text (as a poem composed by Ligeia) in the February 15, 1845, issue of the New York New World. The poem is set in a theater where the audience is composed of angels, and the actors are mimes who are controlled by formless creatures. Suddenly, a blood-red thing appears upon the stage, chasing and devouring the mimes. When the curtain fall down the title of the play is revealed: ‘Man’ and the protagonist is death, ‘The Conqueror Worm’.
Ligeia was generally well received by critics, and Poe himself stated that “Ligeia is undoubtedly the best story I have written” and that “the loftiest kind [of tale] is that of the highest imagination and for this reason only Ligeia may be called my best tale.” H. P. Lovecraft, in Supernatural Horror in Literature, claimed that “it is in two of the less openly poetic tales, “Ligeia” and “The Fall of the House of Usher”—especially the latter—that one finds those very summits of artistry whereby Poe takes his place at the head of fictional miniaturists. Simple and straightforward in plot, both of these tales owe their supreme magic to the cunning development which appears in the selection and collocation of every least incident. “Ligeia” tells of a first wife of lofty and mysterious origin, who after death returns through a preternatural force of will to take possession of the body of a second wife; imposing even her physical appearance on the temporary reanimated corpse of her victim at the last moment. Despite a suspicion of prolixity and top-heaviness, the narrative reaches its terrific climax with relentless power.”
The story has been transposed to the screen several times, and always only loosely. The most famous version is The Tomb of Ligeia (1964, USA) directed by Roger Corman and starring Vincent Price (who also recorded a wonderful reading of the tale, published on vinyl by Caedmon Records in 1977) and Elizabeth Shepherd. Inspired by the tale are also Ligeia (2002; USA) by Dave Lawler, The Tomb (aka Ligeia, 2009, USA) by Michael Staininger, the short Ligeia (2011, Brazil) by Paulo Biscaia Filhog and the still unreleased Ligeia (2015, USA) by Alexander Emmert. Made for television adaptations are Ligeia (1959, Argentina) by Marta Reguera, and Forever Ligeia (1979, Italy) one of the four episodes of the Poe-inspired miniseries Racconti Fantastici, directed by Daniele D’Anza.
Poe’s short story is now revivificated for your pleasure by Cadabra Records, thanks to the combined mastery of Anthony D. P. Mann and Chris Bozzone. The intense reading by actor Anthony D. P. Mann gives new life to the narrator, emphasizing his emotions in a breathtaking crescendo. The score composed and played by Chris Bozzone compliments the reading. Sweet piano chords in continuum amid layers of mellotronic keyboards, evoke the narrator’s love for Ligeia. A keyboard rhythm pattern is added for the description of her eyes, and a sense of light menace is audible in Ligeia’s “gigantic volition”. The reverberated piano chords accompany the woman’s illness and then disappear, leaving a threatening soundscape on which the mortal breath of Ligeia becomes more and more dominant. On Side 2, the piano chords, and then the rhythm pattern, emphasize the description of the abbey and bridal chamber. New mournful piano chords accompany the narrator’s nostalgia for Ligeia, while a descending acoustic guitar arpeggio underscores the worsening of Rowena’s declining health, and a tensive soundscape suggests the presence of “a shadow”. Following the death of Rowena, the piano theme returns atop a tapestry of mellotron, underlining the first two revivifications. Afterwards, it is solely a gloomy background that remains amid the ghostly breathing of Ligeia.
“Man doth not yield him to the angels, nor unto death utterly, save only through the weakness of his feeble will.” It the end, Poe has succeeded in putting this precept into practice in his own life… the astounding willpower in pursuing his artistic vocation, allowed him to defy death through his literary works. 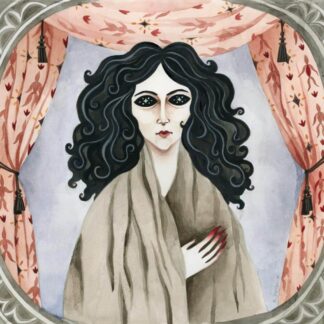