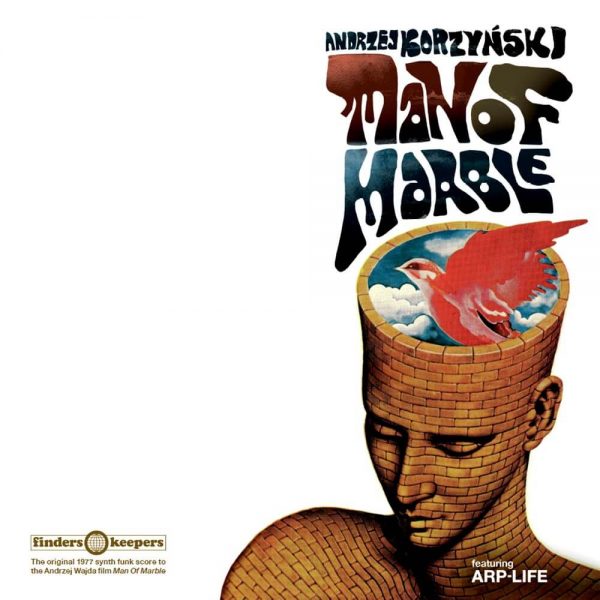 Begging direct comparison to Russia’s Zodiac and sharing an uncanny resemblance to other 1970s European post rock cinematic disco bands like France’s Arpadys (formerly Jean-Claude Vannier’s Insolitudes) or the later projects of Italy’s Goblin (such as Discocross) this soundtrack witnesses Korzyński and Arp-Life at their halcyon; making fantastical and experimental musical approximations of the burgeoning synth funk disco boom which had erupted on the other side of the Iron Curtain.
Man Of Marble unearths Korzyński’s first steps into electronic dance music, and with the addition of bonus tracks from the 1981 sequel Man Of Iron, provides the perfect companion piece to his recently liberated score to Possession (directed by Andrzej Żuławski) which blends the same ingredients through another darker corridor of this versatile composer’s creative mind.
Having given Korzyński his first big domestic theatrical break with the soundtrack to the 1969 Fellini-esque film Everything For Sale (with the Łódź based beat group Trubadurzy), Man Of Marble marked the composer’s fourth collaboration with Andrzej Wajda, a partnership which spanned an eventful eight year pop cultural climate change and bridged the composer’s journey from orch/psych/rock to synthesised Polish cosmic disco – climaxing with the big screen debut of Poland’s first-ever dedicated synthesiser ensemble collectively known as Arp-Life, deriving their name from the first synth to arrive in Poland which hit Warsaw like a meteorite from another planet.