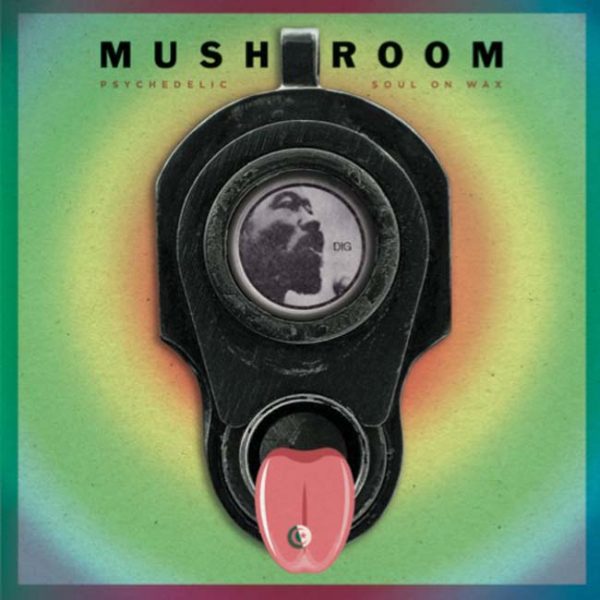 Transparent Blue Vinyl. Mushroom is back with their first new release in several years
One side is an addendum to band-leader Pat Thomas’ book Listen, Whitey!: the sounds of Black Power 1965-1975 with the title track of this new vinyl LP release

“AVANT JAMS FROM REVIVED SF BAND. ..THE LINK BETWEEN ISAAC HAYES AND THIS HEAT” UNCUT 7/10
For nearly 20 years, Mushroom (from the San Francisco Bay Area) has produced their own brand of mostly instrumental 1970’s inspired psychedelic grooves – as well as collaborated (on stage and/or in the studio) with the likes of Krautrock legends Faust, Soft Machine’s Kevin Ayers, Daevid Allen of Gong, Bundy K. Brown of Tortoise and Pete Brown (lyricist for Jack Bruce and Cream).
Along the way, they’ve received praise from the likes of the Village Voice, Down Beat, and all those monthly British publications. Counted amongst their fans are a diverse set of musicians including Bobby Whitlock (of Derek & the Dominoes), Henry Kaiser and even Linda Thompson (as in Richard & Linda).
“Psychedelic Soul On Wax (Eldridge Cleaver vs. Timothy Leary)” is eighteen minutes and fifty-four seconds that documents the following event: The High Priest of LSD, Timothy Leary had escaped from a California prison in September 1970 aided by the Weather Underground. Leary was smuggled into Algeria where he sought shelter from the storm in Black Panther Eldridge Cleaver’s compound. Eventually, the Acid Guru got on Cleaver’s nerves – and he placed
Leary under house arrest. Their mutual admiration society was declared over on January 12, 1971 when Cleaver recorded a proclamation for broadcast on KPFK and KPFA warning other hippies, Yippies and drug takers not to show up at Cleaver’s doorstep.
Upon his extradition to the United States, Leary declared: “Eldridge was moody. At times when I came to the embassy he was rude; other times friendly…he asked a lot about acid. He inquired about my financial transactions. In comradely solidarity he would join me in berating lawyers, publishers, and reporters. We had a lot in common. It was a new experience for me to be dependent on a strong variable, sexually restless, charismatic leader, who was insanely erratic. I usually played that role myself.”
The other side of the album features: Flesh Failures (Let The Sun Shine In) Featuring Caroleen Beatty (vocals) & Ralph Carney (woodwinds) Three minutes and Thirty Seven Seconds Lyrics/Music by Rado/Ragni/MacDermont, arranged by Julie Driscoll, Brian Auger & The Trinity. Sneak Attack Six minutes and forty-nine seconds (Music by Mushroom) . Bowed Gong Ten Minutes and twenty seconds (Music by Dvid Brandt & Mushroom)