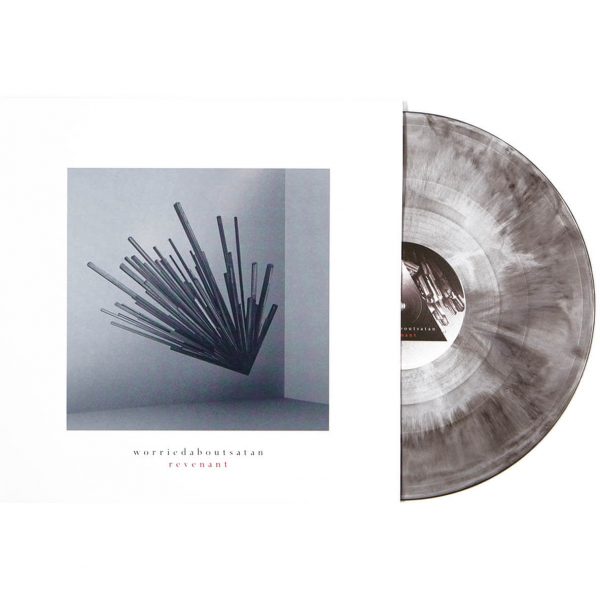 *Silver and black vinyl may or may not have audio distortion intermittently during playback, depending on your system. This was discovered after the press had been completed and packed, so we have included a red repress without audio issues. All purchases will ship with both silver and red copies.

After a busy 2018, which saw ​worriedaboutsatan​ release a steady stream of new material, the Yorkshire based duo start the new year with the release their fourth full length album, ​‘Revenant’​.

Featuring 6 tracks, the record marks a slight departure from their previous album, the critically acclaimed ‘​Blank Tape​’, by venturing into more synthesiser heavy pieces, based around dark, brooding atmospheres and switching from the bouncing arpeggios and slow, hypnotic rhythms of 10 minute album opener ‘Skylon’, to the jittering, cinematic rush of ‘Making Your Masks’.

“We basically holed ourselves up in Tom’s rural Yorkshire studio” explain the band, “and over the course of about two or three weeks, we had quite a bit of new material that we sequenced into two separate records, one of which ended up being Revenant”.

Inspired by the burgeoning underground network of fellow synth-based acts, like tour-mate ​Pye Corner Audio​, the band channelled their signature post-rock guitars and skyscraping atmospherics into something more synthetic, but without losing what makes them the band that garnered attention for soundtracking ​Adam Curtis’ Hypernormalisation​ documentary back in 2016.
The album will be released on 12” vinyl and digital download by Kent based synth label Burning Witches Records​, which marks the first worriedaboutsatan album released by another label since 2009. “The guys are just the best” the band says, “they put a lot of effort into everything they do, and their aesthetic matches ours pretty much perfectly.”