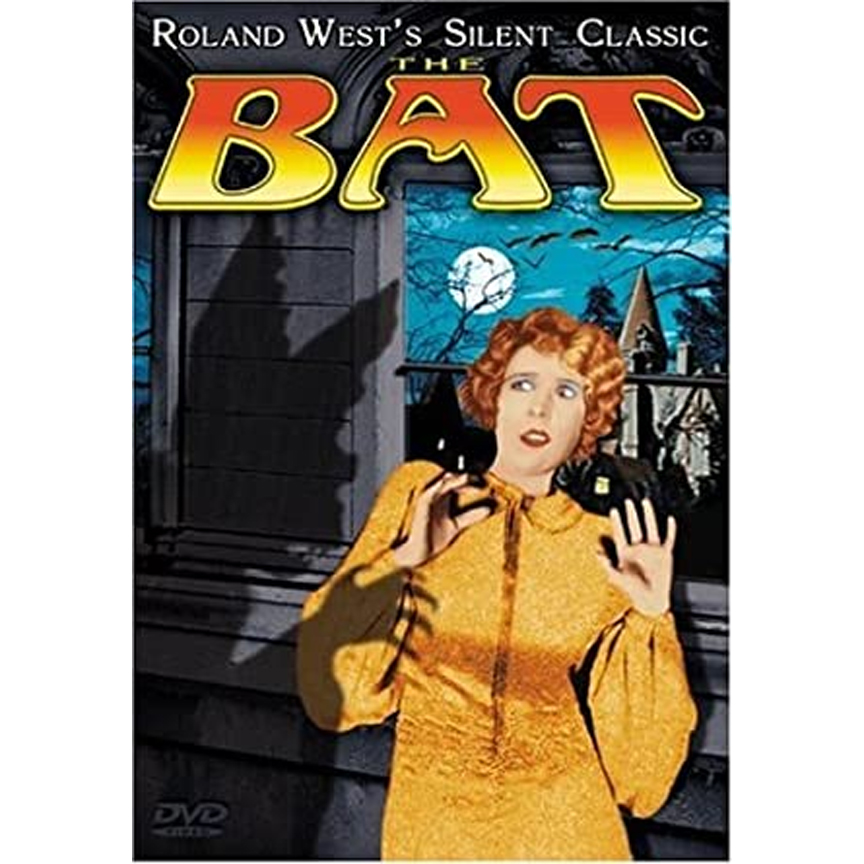 Another prime example of one of the silent era’s old dark house mysteries, The Bat (1926) is fun fare for those who still have a bit of their childhood intact inside them. One can imagine how well the film played on a Saturday matinee’s audience. Independent producer and director Roland West produced his motion picture version of the popular play with the intent to simply entertain his audience. The film features the requisite amount of mysterious visitors with ulterior motives, shootings, creepy butlers, secret passages and hidden rooms.

The Bat, a master criminal who has been terrorizing the city, sends a letter to wealthy Gideon Bell boasting of his upcoming robbery of the Favre Emeralds at midnight, in spite of the presence of the police. After successfully completing the theft, The Bat proceeds to the Oakdale Bank where he witnesses another criminal robbing the bank’s safe. The Bat pursues the robber to the estate of Courtleigh Fleming, president of the bank. There, rich Cornelia Van Gorder has left New York City and leased the mansion in search of peace and quiet, accompanied by her niece, Dale Van Gorder, and her comic-relief maid, Lizzie Allen. The Bat follows the robber to the house but is unable to determine where he has gone with the bank’s money.

The next day, a newspaper report indicates, not only has the bank been robbed of $20,000 and the prime suspect is bank cashier Brooks Bailey, that bank president Fleming has been found dead in Colorado. His nephew, Richard Fleming, has leased his uncle’s home to square some gambling debts, and now learns from Dr. Wells, the Fleming family physician, that the buzz around town is that the stolen money may be hidden in the Fleming mansion and Van Gorder must be scared into leaving.

Meanwhile, Dale smuggles her fiance Brooks into the situation as a gardener so that he may find the stolen money in order to clear his name. Dr. Wells, Richard Fleming and a police detective Moletti appear on the scene to begin puzzling over the location of the money and the identity of The Bat. Fleming finds the mansion’s original blueprints to uncover the location of the hidden room, but before reaching it, he is mysteriously shot to death by The Bat. Moletti suspects that Dale is the murderer and has the missing scrap of blueprint.

Enter Anderson of the Judkins Detective Agency, who was hired by Cornelia Van Gorder, and a mysterious man with no name who wanders about the house in a daze. Meanwhile, The Bat discovers the location of the safe and Brooks sees the living Courtleigh Fleming catwalking the roof of the mansion. The band of frightened amateur detectives pursues Fleming as Dale discovers the location of the hidden room. In a struggle, The Bat shoots Fleming and escapes into the house. The group investigates the empty room, discovers the now-truly dead Fleming, and Dale discovers the satchel full of the bank money. Setting a diversion, The Bat returns for the money, is held at gunpoint, but still manages to escape with the money. He is captured again, by dumb luck, and his secret identity revealed.

The film has been credited as Bob Kane’s inspiration for the creation of the comic book character, Batman. Not only does the master criminal wear a bat mask disguise, there is even a rudimentary form of ‘the Bat Signal’ present in the film. — Carl Bennett