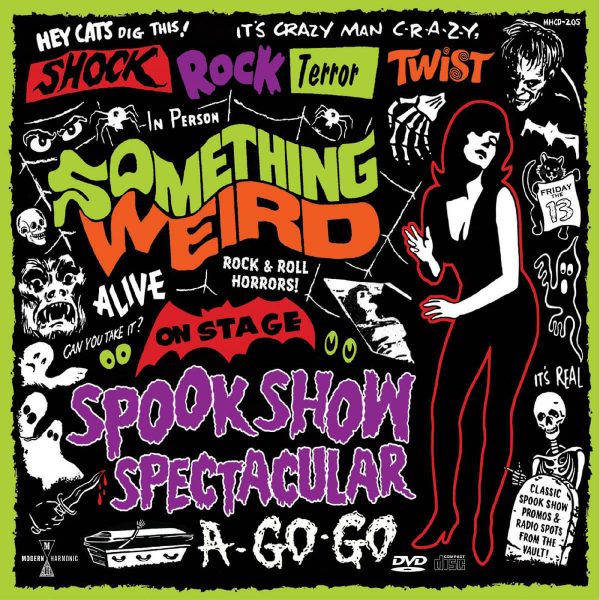 • The unholy follow up to the wildly successful Something Weird Greatest Hits!
• The wildest spook show trailers from the SW vault on LP or CD both with a bonus DVD!
• Cut by Warren Defever (His Name Is Alive) and pressed on colored vinyl at Third Man!

From the 1930s until the 1970s a popular form of entertainment, quaintly called, The Ghost (or Spook) Show, enthralled America. Traveling magicians and illusionists went on the road and added horror elements to their regular (often predictable) stage acts. This appealed to youngsters eager for cheap thrills and chills. The advertising campaigns promised to “scare the yell” out of those “brave” enough to attend, and performances took place mostly at midnight in movie theatres that were decorated with outrageous lobby displays publicizing the shocking and scary things about to be seen – ghosts, ghouls, monsters, gorillas, mad doctors, and some things “so terrifying” that they couldn’t even be mentioned. During the course of the night, classic horror movies were shown, and there were contests with corny gimmicks and silly prizes.

How does Something Weird fit in? Well, during 2001 SWV compiled what was to become one of their most popular and beloved DVDs, Monsters Crash the Pajama Party Spook Show Spectacular. It featured over three hours of rare Ghost Show shorts and trailers, radio spot audio, galleries of memorabilia, and commentaries with legendary living Ghostmasters. The folks at SWV were huge Spook Show fans and collected anything related to the subject including original 35mm film trailers as well as radio spots on promotional 45s and magnetic tape. So this was a dream project for them, and something near and dear to their bloody hearts.

Since its release, audio bits from the MCTPPSSS have popped up on radio stations and music compilations. People love them. So it just seemed logical that Something Weird do a Spook Show album. And like our old pal, Jim “The Mad Doctor” Ridenour, we’ve always believed that horror and rock ‘n roll go hand in hand, so what better way than to combine some rarely heard, fiendish surf and garage rock instrumentals with the trailer & radio spot audio and incidental music from the DVD? Now all groovy ghouls and goblins can time travel and have a Spook Show A Go-Go Party! (Just add your own ghosts and gorilla suits…)