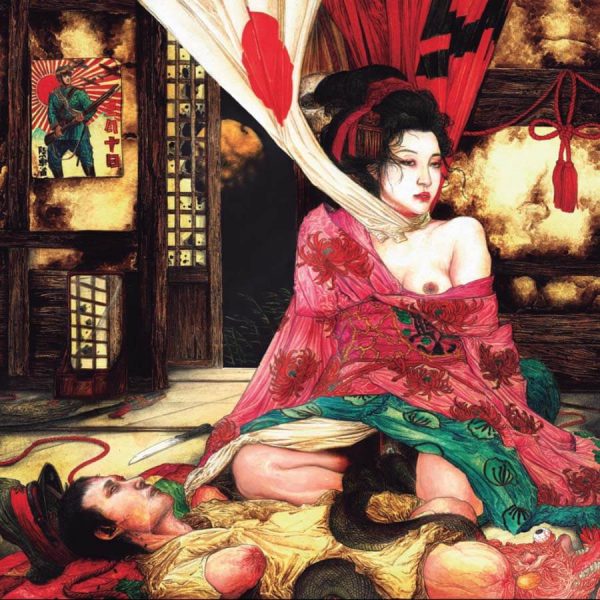 Written in 1929 by Edogawa Rampo, The Caterpillar (Imomushi) was originally banned due to it’s content and is regarded as one of the darkest and most controversial tales ever written by a Japanese author. Tomorrow at noon eastern time we are proud to release one of our most original and creepiest records to date! Laurence R. Harvey has delivered what we think is one of his best readings, while composer Chris Bozzone has created a nightmarishly haunting backdrop. Zakuro Aoyama has painted this absolute masterpiece for the album art. Hand lettering by Jonathan Dennison. Liner notes are provided by Japanese cinema scholar Marc Walkow. Packaged in a single sleeve tip-on jacket, comes with poster and insert.

“The Caterpillar” was originally published without incident by Shin Seinen magazine in 1929, although editors there originally wanted to print the story under the more prosaic title “Nightmare.” (Which could be applied to nearly all of Rampo’s stories.) But when it was proposed for re-publication in 1939, Japan was then in the midst of the Second Sino-Japanese War, which had started two years earlier. According to the publisher, wartime censorship at the time was so common that the magazine often went out with entire passages blacked out of stories; because “The Caterpillar” dealt directly with anti-war sentiments, and could also be seen to be promoting scorn of military decorations (both forbidden topics at the time), the publisher decided to cut the story from the Rampo reprint so as not to send it out into the world as mutilated as its military casualty protagonist. Rampo was furious and spent most of the subsequent wartime years, possibly under duress, concentrating his work on safer stories about boy detectives solving crimes on the homefront.
“The Caterpillar” had always been a controversial story, however. Rampo’s wife, after reading it, declared it to be “filthy” and when Rampo showed the story to several geisha friends, they all told him they couldn’t eat after finishing it. But left-wing, anti-war activists claimed Rampo as their hero after the story’s publication, even though Rampo vehemently denied that he had written the story with any particular ideology in mind. He asserted that his only objective was to depict “humanity’s ugly ego” absent any other political motive.