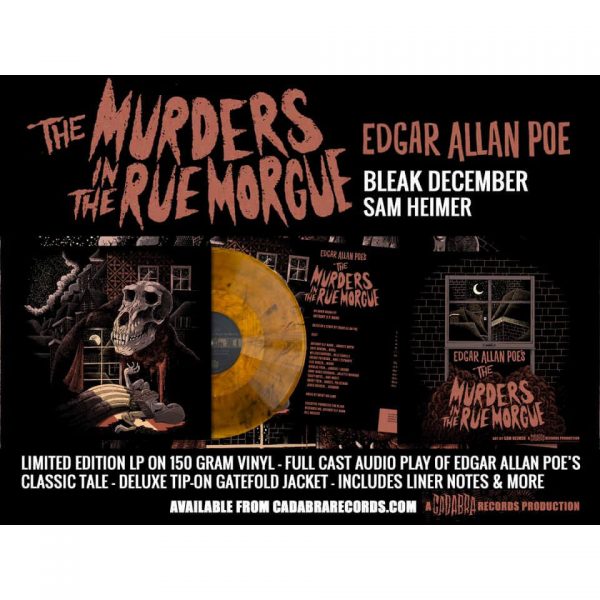 The Murders In The Rue Morgue

Edgar Allan Poe’s The Murders in the Rue Morgue LP – By Bleak December. This is a full cast audio play adaption of the classic Edgar Allan Poe story. Sold Out instantly at Cadabra – Super Limited.

From the producers liner notes:

– Dr. Watson to Sherlock Holmes in Sir Arthur Conan Doyle’s A Study in Scarlet (1887)
The publication of Edgar Allan Poe’s The Murders in the Rue Morgue, in the pages of Graham’s Magazine in 1841, ushered in the dawn of a new era in genre fiction – the birth of the “consulting detective”, and the prototype for modern detective fiction.
Although never achieving the notoriety of his successors (Sherlock Holmes, Hercule Poirot, etc.), Poe’s clever hero C. August Dupin establishes the tropes of his progeny: a quirky, quizzical outsider who works in the periphery of the established police system, his methods often vaguely skirting the line between the right and wrong sides of the law, yet a hero who at their base core is inherently dedicated to the pursuit of justice. Dupin suffers fools (in our adaptation Inspector Jaubert) no better than Holmes clashes with Lestrade of Scotland Yard, and the reader is led through his stories in anticipation of the great reveal, confident that the hero is always several steps ahead of everyone else. As with any good detective story, Poe’s three tales featuring Dupin (The Murders in the Rue Morgue, The Mystery of Marie Roget and The Purloined Letter) are cracking good reads.
Unlike the afore-mentioned “children” of Dupin, however, here we have a character that has not translated to the screen or canon of pop culture with as much success… which is not for wont of multiple attempts by filmmakers to capitalize upon the grim and sensational plot points of Rue Morgue, including well-known (and very liberal) 1932 adaptation starring Bela Lugosi as a crazed scientist (!). For purists, a 1986 television version directed by Jeannot Szwarc and starring the great American actor George C. Scott as Dupin, is of particular note. There is, however, no doubting the Poe / Dupin contribution to the annals of popular detective fiction, and we are very pleased to be adding our own, more traditional dramatization of the tale to the mix.
There was never any question that Bleak December would be adapting The Murders in the Rue Morgue for audio. In fact, it has been among our most-requested stories from the offset! In the re-telling of the story, I have taken care to maintain the essential plot elements from Poe’s original text, and blend them with the now expected pacing and unraveling of the mystery, as perfected in the genre by Mr. Doyle, Mrs. Christie, etc. Some wonderful character actors have joined us in this production (including Dave Hudson as Duval, Ilke Hincer as Mirko, stalwart Nik Yuen as Jaubert and Anne-Marie Bergman as the landlady), and there’s a terrific pulse-pounding score by Brent Holland – we hope the listener agrees that this audio play sits among Bleak December’s most exciting adaptations.
We hope you enjoy it… à la prochaine.
Anthony D.P. Mann
Executive Producer, Bleak December Inc.