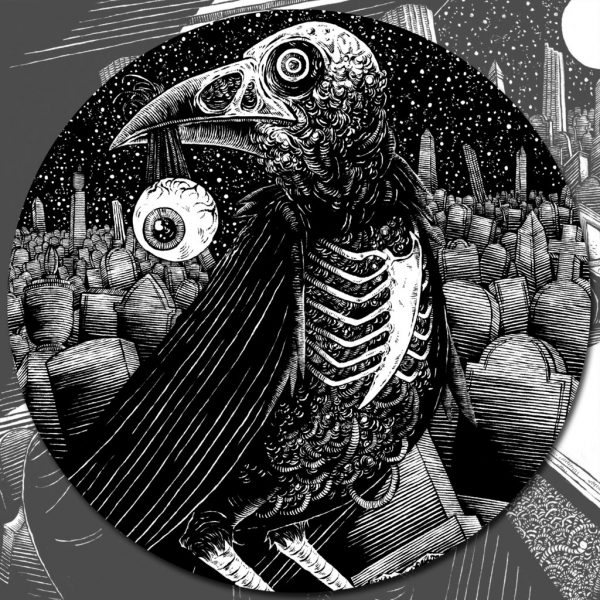 THE RAVEN VARIANT – Just 200 copies pressed with only 25 available in the UK and Europe!

This new edition comes with an expanded 6 panel fold out sleeve by artist Sam Heimer and new liner notes. This is a single sided 7″ with screen printed art on the B side. A true museum quality piece on a vinyl record!

One these are gone, they’re gone and will not be repressed.

The Raven by Edgar Allen Poe is undoubtedly one of the most popular pieces of literature in the history of the horror genre, and here the poem gets the deluxe treatment with a meticulously professional delivery in every aspect. The poem is here read by Anthony D.P. Mann, a Canadian-based filmmaker and actor with five feature films and a lifetime of stage and radio to his credit. In roles ranging from Count Dracula and the Phantom of the Opera, to Ebenezer Scrooge, his love of the classics is evident in his work. He is delighted to be lending his voice to a series of releases with Cadabra Records, indulging in his first passion – the theater of the imagination. The reading is backed by a score created by Italian composer and multi-instrumentalist Maurizio Guarini, most notably known as a core member of Goblin, who has released dozens of albums since the 1970s including soundtracks for cult classics like Suspiria, the European release of Dawn Of The Dead, and much more. Guarini adds a strikingly beautiful yet haunting score that accents the intense reading.

In a statement about the new collaboration, Maurizio Guarini offers, “This was the first time I was involved in something like this, I mean it’s not a movie where you work basically on visuals, it’s not a standalone studio project. Working with the spoken word lets the music play a stronger role, visuals are just on the imagination to the listener, so a different approach was needed.”