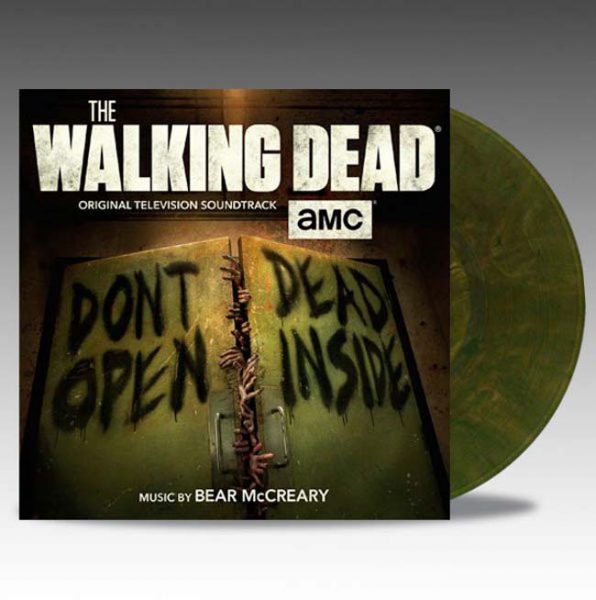 First time ever release of the highly anticipated score to the global hit AMC series by Emmy Awardwinning composer Bear McCreary.  LP in a gatefold sleeve.  140g multi-coloured double vinyl in 4 colour printed inner sleeves in a gatefold cover, presenting a gallery of key art from the series.  Also includes a fold-out ‘Rise Up’ poster (12” × 24”) and printed pull-out insert featuring liner notes by composer Bear McCreary. The second those cascading strings hit in “Theme from the Walking Dead,” fans know what’s coming. The musical world of the show is treacherous, but also full of hope: the echoing glitches and rumbling pulses of “Negan” give a sense of the violence that lies in store, but the calming violins of “Sophia” remind us that there’s pathos and comfort to be found, even in the places that seem most hopeless.

Score composer Bear McCreary was born in Fort Lauderdale, Florida, on February 17, 1979, the son of the writer Laura Kalpakian. He obtained degrees in composition and recording arts from the Thornton School of Music at the University of Southern California and became a protégé of the film composer Elmer Bernstein, for whom he reconstructed and re-orchestrated the score for the 1963 film Kings of the Sun, resulting in a new recording of the music.

After scoring a number of short films in the late ’90s and early 2000s, McCreary was hired to compose the music for a new version of the television series Battlestar Galactica, which premiered on the Sci Fi Channel in 2004. Soundtrack albums of his music were released in 2005, 2006, 2007, and 2009 by La-La Land Records, corresponding to the four seasons of the series. During that time, he also scored the straight-to-video film Rest Stop (released by PlanR) and its sequel, Rest Stop: Don’t Look Back (released by La-La Land.), as well as another straight-to-video feature, Wrong Turn 2: Dead End (La-La Land). The label also issued his music for the Fox TV series Eureka and Sci Fi Channel’s Terminator: The Sarah Connor Chronicles, both in 2008. His score for the pilot episode of the Battlestar Galactica prequel Caprica was released in 2009, and he stayed on to write for the series’ full one-season run.

That same year, he was tapped to score AMC’s popular zombie drama series The Walking Dead, which premiered in October 2010. Over the next few years McCreary’s talents becoming increasingly in demand as he took jobs scoring NBC’s superhero drama The Cape (2011), the historical fantasy series Da Vinci’s Demons (2013), and Marvel’s Agents of S.H.I.E.L.D. (2013), just to name a few. In 2015, the first of his Billboard-charting soundtracks to the STARZ time-travel series Outlander was released by Relativity Records. The following year brought a string of film scores in the horror realm that included The Forest, The Boy, and 10 Cloverfield Lane. More genre-related scores followed in 2017, including soundtracks for the sci-fi black comedy Colossal and the slasher thriller Happy Death Day, as well as the J.D. Salinger biopic Rebel in the Rye. ~ William Ruhlmann