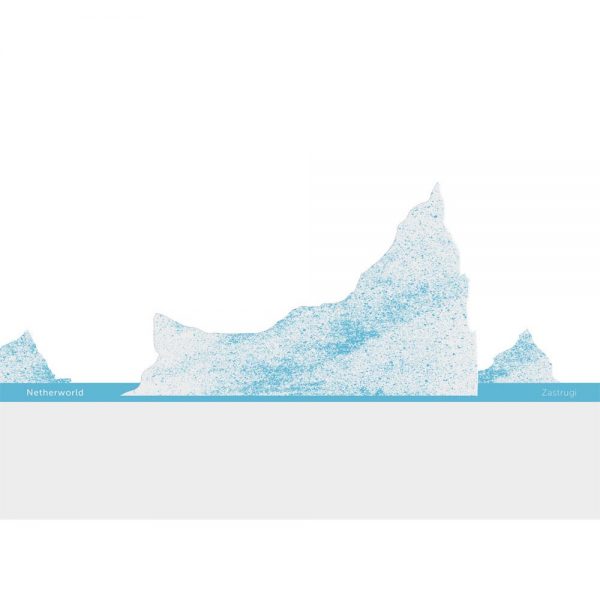 An Iceberg is a large mass of ice detached from a glacier or from a floating platform of glaciers that drifst in the sea. It is in constant motion and most of its mass remains submerged under surface of the water. The goal of this new Iceberg series of releases on Glacial Movements is to describe through techno / dub music this huge mass of ice. Each record release will be produced in a special maxi digipack with images printed and embossed in spot gloss.

The first chapter of this series is “Zastrugi” – the first techno glacial album by Netherworld. It’s a wind-eroded, hard-packed snow surface with irregular grooves and sharp ridges that is mostly found in the earth’s polar regions as well as on high mountains subject to high winds. The ridges, often appearing like frozen waves, form parallel to the prevailing winds and are usually found on windward slopes. The windward surface is usually rough and has a sand-blasted appearance. The snowy surface is very hard and is difficult to cross by foot or on skis. Netherworld aka Alessandro Tedeschi is also the creator and owner of Glacial Movements Records in Rome, Italy. He published several works on various labels such as Fario, Angle Rec, Umbra, and Taalem, The Wire Tapper Series and Glacial Movements with releases like “Morketid” (2007), “Over the Summit” (2011) and “Alchemy of Ice “(2013) .These were critically acclaimed gems of ambient music.

1) Mapsuk (13:05)
An overhanging shape caused by the erosion of the wind on the snow surface.

2) Bergie Seltzer (12:46)
The sound produced by an iceberg when it melts. It’s generated by the release of air bubbles trapped in the ice sheets of the iceberg.

3) Sérac (10:03)
A block or column of glacial ice, often formed by intersecting crevasses on a glacier.

4) Dry Andes (09:55)
A climatic and glaciological subregion of the Andes, and it’s characterized by the presence of penitentes.

5) Uikka (10:21)
An evil spirit of Inuit mythology. It’s widely feared because it aground boats between the ice blocks.