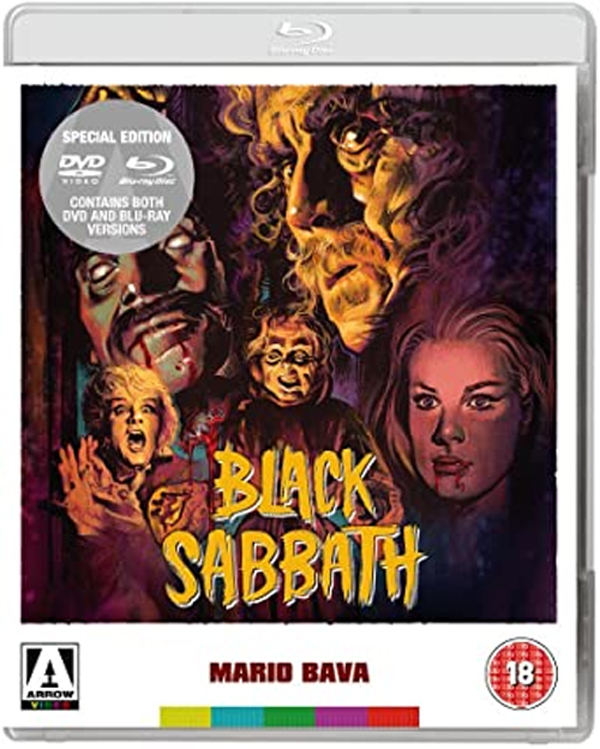 Introduction to the film by author and critic Alan Jones

A Life In Film An Interview with star Mark Damon

Collector’s booklet featuring new writing on the film by critic David Cairns and a substantial interview with AIP Producer Samuel Z. Arkoff on his experiences of working with Bava, conducted by Tim Lucas, illustrated with original stills and posters

One of Mario Bava’s finest and most widely-acclaimed works, this 1963 Italian horror anthology film, comprising three short gothic infused horror stories, proves a compelling and highly effective example of the ‘anthology horror genre’, beautifully blending both modern and period stories, and interweaving some of the most striking and potent themes from his earlier works.

“In the giallo-style ‘The Telephone’, a woman is terrorised by her former pimp after his escape from prison, and tries to escape him with the help of her lesbian lover, who has a dark secret of her own.  In the Victorian-era ‘The Drop of Water’, a nurse steals a ring from the corpse of a dead spiritualist, which naturally tries to get it back.  But it’s the 19th-century Russian story ‘The Wurdalak’ that comes closest to Bava’s earlier classic, with the great Boris Karloff as a much-loved paterfamilias who might not be entirely what he seems.”

Perhaps the most accessible feature for those new to discovering Bava’s work, ‘Black Sabbath’ presents an alluring array of some of the finest and most impressive techniques first developed in his previous features, proving a unique and highly entertaining showcase of some of the themes and styles he would further develop and re-work of the course of the following two decades.

“It is said that the four original members of the band BLACK SABBATH, then known as Earth, came across the name after seeing horror fans queuing outside their local picture house to see the movie.  They then set about trying to create the musical equivalent of what horror fans saw and loved in scary movies.”

Over the top, yet ultimately highly entertainng performances from the likes of the great Boris Karloff, Michele Mercier, Lidia Alfonsi and Mark Damon, combined with Bava’s superb fusion of rich colour, atmospheric lighting and astute command of suspense, help further elevate the immersive and exaggerated qualities of the film, ultimately delivering a much more vivd, absorbing and memorable piece of work.

A dark, suspense-filled, visual feast, Bava’s stylish, highly influential and beautifully crafted compendium continues to hold up well both as one of the stand-out works of Italian horror cinema and as a benchmark of the horror anthology/compendium film genre.

The original European version of the film looks very impressive, presenting rich, well-saturated colours and hues, good definition and detail (though sadly never razor sharp), and strong contrast and black levels. The image may be rendered slightly too dark in places for some, but thankfully the image is very clean, with a nice layer of natural grain, and no significant signs of any obstructing DNR or manipulation, retaining an overall authentic quality to the film.

The weaker and slightly longer English language AIP (American International Pictures) version of the film does look significantly different from the stylish original European version, presenting a much softer image, with less fine detail and information, less vivid colours and tones (compared with the rich, lush palette of the original version), and a great deal more grain in the image. Still a significant upgrade on previous editions, but not as impressive as the original version.

In terms of the audio presentation, we are presented with the option between the English LPCM Audio 2.0 (on Baron Blood – re-dubbed AIP version) and the original Italian LPCM Audio 2.0 (on ‘I tre volti della paura’ – European version). Again, both linear PCM audio mixes prove very similar, and aside from some very mild hiss, deliver clear, stable, undistorted dialogue, good levels of depth and slightly wider dynamic range than the accompanying release. ‘I tre volti della paura’ features the score by Roberto Nicolosi, whereas the re-edited and re-dubbed AIP version ‘Black Sabbath’ features a score from Les Baxter.