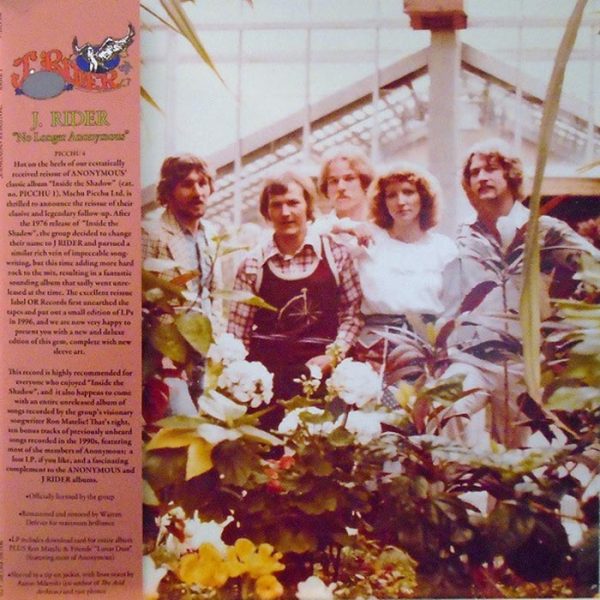 No Longer Anonymous
Machu Picchu / M’Lady’s
PICCHU4
Release Notes
First time on LP in almost 20 years!
Officially licensed by the group, who will receive royalties from sales of this album .
Remastered and restored by Warren Defever for maximum brilliance.
LP comes with download card that includes the entire Lunar Dust sessions as bonus tracks
Sleeve notes by Aaron Milenski (co-author of the essential reference to The Acid Archives, and also author of the sleeve notes for the Anonymous reissue from last year).
LP sleeved in a tip-on jacket, with a 4-page insert with never before seen photographs .

Hot on the heels of our ecstatically received reissue of ANONYMOUS’ classic album “Inside the Shadow” (cat. no. PICCHU 1 – back in print later this year), Machu Picchu Ltd. is thrilled to announce the reissue of their elusive and legendary follow-up. After the 1976 release of “Inside the Shadow”, the group decided to change their name to J RIDER (after the second cut on the Anonymous LP) and pursued a similar rich vein of impeccable songwriting, but this time adding more hard rock to the mix, resulting in a fantastic sounding album that sadly went unreleased at the time. The excellent reissue label OR Records first unearthed the tapes and put out a small edition of LPs in 1996, and we are now very happy to present you with a new and deluxe edition of this gem, complete with new sleeve art.
“Kiss Of Your Soul” and “Pike River” get our vote for two of the greatest songs ever written, and “One Sided Lover”, “High Roller” and “Sunday‘s Hero” each offer a heavier spin on the group’s Television-like interplay and compositional prowess.
This record is highly recommended for everyone who enjoyed “Inside the Shadow”, and it also happens to come with an entire unreleased album of songs recorded by the group’s visionary songwriter Ron Matelic! That’s right, ten bonus tracks of previously unheard songs recorded in the 1990s, featuring most of the members of Anonymous; a lost LP, if you like, and a fascinating complement to the ANONYMOUS and J RIDER albums. (Bonus tracks will be included in the form of a download card with each LP)