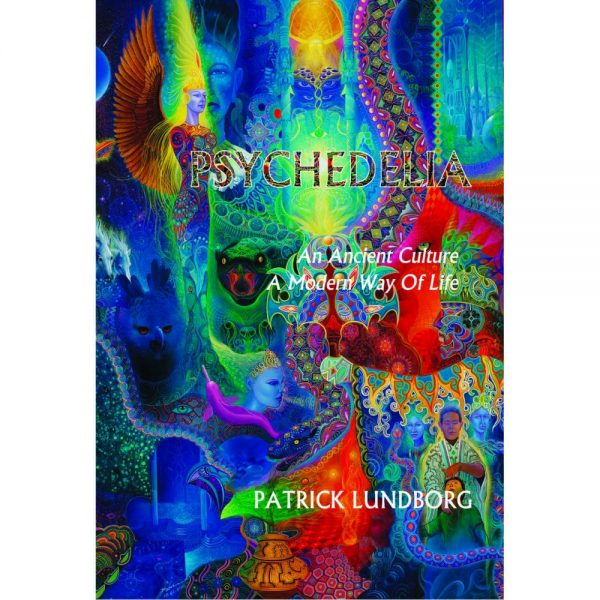 Second Edition. Out of Print and becoming increasingly rare.

A groundbreaking new book from the author of the highly-acclaimed Acid Archives, published by Lysergia: Psychedelia: An Ancient Culture, A Modern Way of Life is Patrick Lundborg and Lysergia’s greatest achievement so far. The product of 20 years of research, the 500+-page work is likely to prove as pioneering as the preceding Acid Archives, which went through five reprintings and received favorable reviews in leading magazines such as Mojo and The Wire. A larger number of people are exploring psychedelic states of mind in the world today than at any other point in history. Their shared experiences form the outline of a vast underground culture, whose steady influence upon society can be traced across thousands of years, back to Amerindian plant drug cults and the psychedelic celebrations in ancient Greece that gave birth to our Western society. But the full scope of this psychedelic culture, and its many expressions in the past, has remained poorly understood or even unknown. Psychedelia has usually been taken as a metaphor, or a symptom of something else, even though its true nature is singular and unparalleled

This is the first-ever book to present psychedelic culture in its full complexity and range. Out of a colorful history that spans 3,500 years, emerges a philosophy and way of life that is as dazzling and rich as the psychedelic experience itself. As this book shows, psychedelia is a living underground culture, engaged in constant dialogue with its mainstream counterpart. Psychedelia’s creative, visionary presence in art, rock music and pop culture is thoroughly examined, highlighting many unique and at times unknown works and traditions, from William Blake to Philip K. Dick, from Eden Ahbez to Shpongle, from Haight-Ashbury to the beaches of Goa. The 20th century’s misguided attempts to reduce psychedelia into a branch of psychology or religion are given a critical, sometimes controversial look. A case is made for psychedelic philosophy, a fresh, unprejudiced model to replace the failed interpretations of the past. In the third millennium, psychedelic culture may be standing on the brink of a mystery greater than anything encountered in the past. This mystery comes forth in chapters on ayahuasca and DMT, and has reverberations far outside the realms of psychedelia, cutting into vital questions of consciousness and evolution. Most of all, psychedelia is a celebration of life, in the here and now and in the deep realms of inner-space. The final chapters of Psychedelia discuss the challenges and rewards of the psychedelic experience, as mastered by shamans and teachers from various entheogenic cultures.