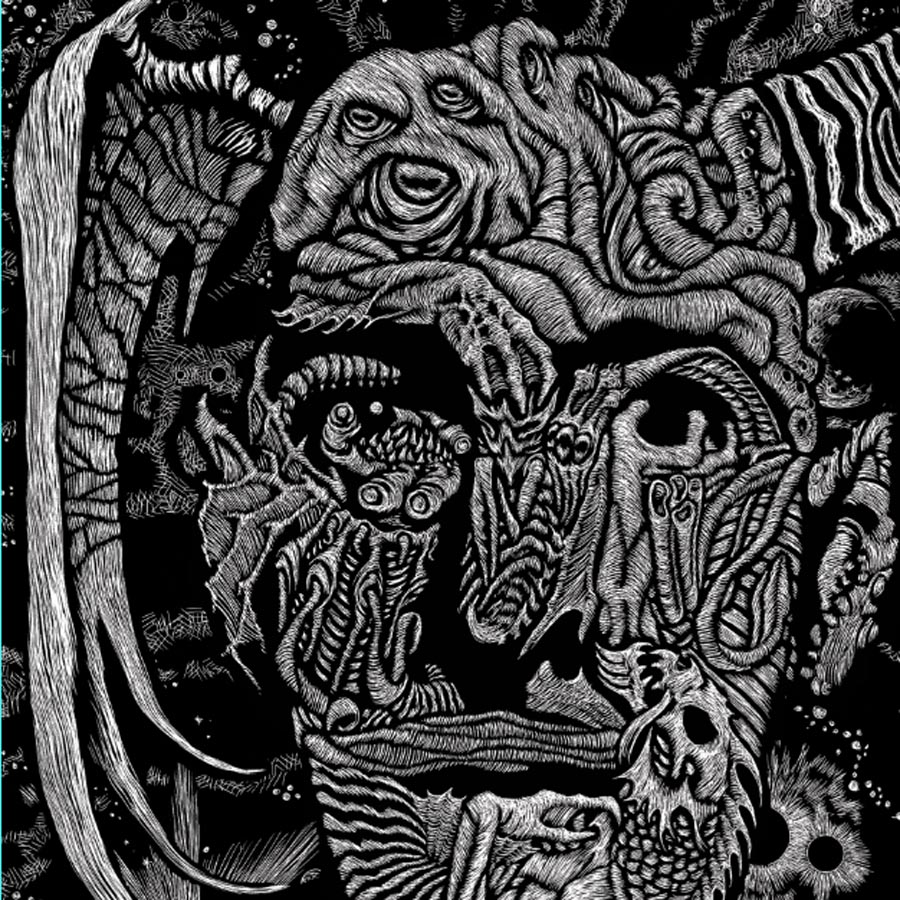 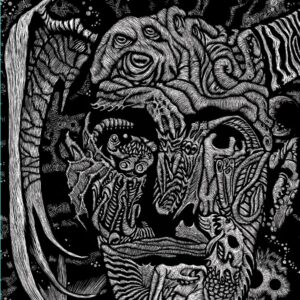 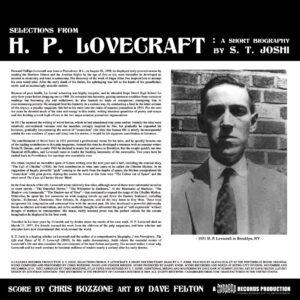 Cadabra Records first non-fiction release and the first audio biography on one of the most influential authors of all time, Howard Phillips Lovecraft. The content of the record is based around Lovecraft’s life during the writing of his most notable stories. We have modeled this production to be a timeless record to be enjoyed through the ages. Black vinyl edition of 100x copies.

Howard Phillips Lovecraft was born in Providence, R.I., on August 20, 1890, he displayed early precociousness by reading the Brothers Grimm and the Arabian Nights by the age of five or six; soon thereafter he developed an interest in chemistry, and later in astronomy. His discovery of the work of Edgar Allan Poe inspired him to attempt his own weird tales. After the early death of his father, his upbringing was left to the hands of his grandfather, uncle, and an increasingly neurotic mother.

Because of poor health, his formal schooling was highly irregular, and he attended Hope Street High School for only three years before dropping out in 1908. He retreated into hermitry, gaining immense erudition from voracious readings but becoming shy and withdrawn; he also learned no trade or occupation, consigning him to ever-increasing poverty. He emerged from his hermitry in a curious way, by conducting a feud in the letter column of the Argosy, a popular magazine; this led to his entry into the realm of amateur journalism in 1914. For the next ten years he devoted much of his time and energy to this realm, writing immense quantities of poetry and essays and also holding several high offices in the two major amateur journalism organizations.

In 1917 he resumed the writing of weird fiction, which he had abandoned nine years earlier. Initially his tales were relatively conventional ventures into the macabre, strongly inspired by Poe; but gradually he expanded his horizons, gradually incorporating the notion of “cosmicism” (the idea that human life is utterly inconsequential amidst the vast confines of space and time) into his stories; it would be his signature contribution to literature.

The establishment of Weird Tales in 1923 provided a professional venue for his tales, and he quickly became one of the leading contributors to this pulp magazine. Around this time he developed a romance with an amateur writer, Sonia H. Greene, and in early 1924 he decided to marry her and move to Brooklyn. But the couple quickly ran into financial difficulties, and Lovecraft came to loathe the bustling immensity of the metropolis. Two years later he rushed back to Providence; his marriage was essentially over.

His return inspired an incredible spate of fiction-writing over the next year and a half, including the seminal story “The Call of Cthulhu” (1926), his first contribution to what later came to be called the Cthulhu Mythos. In its suggestion of hugely powerful “gods” coming to the earth from the depths of space, the Mythos encapsulated his “cosmicism” with grim power. Among the stories he wrote at this time were “The Colour out of Space” and the short novel The Case of Charles Dexter Ward.

In the final decade of his life, Lovecraft wrote relatively few tales, although most of these were substantial novellas or short novels—“The Dunwich Horror,” “The Whisperer in Darkness,” At the Mountains of Madness, “The Shadow over Innsmouth,” “The Shadow out of Time”—that continued to expand the range of the Cthulhu Mythos. Otherwise, he spent his few resources on wide-ranging travels up and down the Eastern Seaboard, including Quebec, Richmond, Charleston, New Orleans, St. Augustine, and all the way down to Key West. These trips invigorated his imagination and connected him with the ancient past. He also developed a powerful philosophy based on atheism and materialism, and in his aesthetic thought he advocated the goal of “self-expression” without thought of markets or remuneration. His dense, richly textured prose was the perfect vehicle for the cosmic imagination he displayed in his best work.

Troubled in his later years by ill-health and by doubts about the merits of his own work, H. P. Lovecraft died on March 15, 1937. His friends rescued his work from the oblivion of the pulp magazines, and later scholars and disciples have now disseminated that work around the world.

S. T. Joshi is a leading scholar on Lovecraft and the author of a comprehensive biography, I Am Providence: The Life and Times of H. P. Lovecraft (2010). In this audio documentary, Joshi relates the essential events of Lovecraft’s life and also examines the core elements of his best fiction and poetry. His account makes it clear why Lovecraft and his work continue to fascinate millions of readers nearly a century after his early demise. 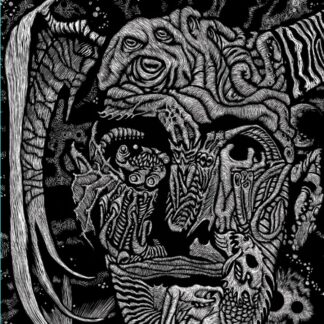 You're viewing: Selections From H. P. Lovecraft: A Short Biography $47.01
Add to cart